A silly party game about coming up with the rules of a football-like sport.

You will need at least 4 players, a piece of paper to write some rules on, and a stack of cards with some sweet verbs on them.

Start with some basic rules on the sheet: What is a ball? How do you move the ball? Where do you play? How do you win?

Each round 2 players will represent teams playing a match of Super Aussie
Rules Football and will play out cards to represent how they try to win.

Another player is the Referee and will be the final say on who wins a match, keeping to the rules as currently written. If anything the players do breaks the current rules of the game, they immediately forfeit all goals and their opponent wins the current match.

If one team has clearly won the match, you may move on. If there is a draw, play one more time with players revealing their cards simultaneously and explaining how they score more goals.

At the end of the match, the other players are the Super Rules Council
and will add new rules to the rule sheet to shape the game.

The goal is to craft the game of Super Aussie Rules Football into something that is fun and fulfilling to play and to watch. Or is profitable and marketable.

You may also ban a card that has already been played and destroy it.

Pass the cards around and refill to 6 cards and rotate roles for the next match.

Continue playing until you feel you have crafted a truly SUPER Aussie Rules Football or until you get bored or hungry or tired or whatever, I don't make the rules here.

Here's an example of starting rules:

Here are some example verbs for the cards: 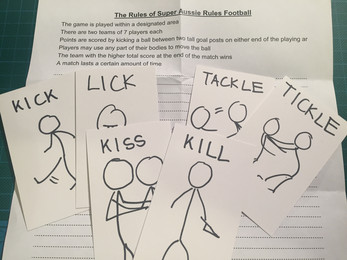