This started out as a thread on Twitter, but I thought it would be useful to also have it documented here.

The Outer Whorls is a GMless story game about worlds on the brink of a galactic anomaly. I made this back in October 2019 while on a flight back from Brisbane to Melbourne. I wrote it on my Notes app and posted it to Twitter, then later put it on itch and submitted it to #AdAstraJam.

I called it a "digital analog game with a point based resolution mechanic" because it uses pointing fingers at each other as a resolution mechanic, which I still find funny. It's also the first game PDF (or anything actually) I ever laid out using Canva, which was fun to learn and get into.

The genesis of the game is basically just the pun in the title. Outer Wilds and The Outer Worlds were major video games released in 2019 and they kept getting mixed up in coverage (there's even a "not to be confused with" note on each of their Wikipedia pages omg), so I thought I'd make a game with a similar title as well.

The title acted as a pretty good guide and provided the following parameters: It needs to be set in space, and whorls implied something with spinning galaxies or fingerprints, so I made fingers and fingerprints the key game components. 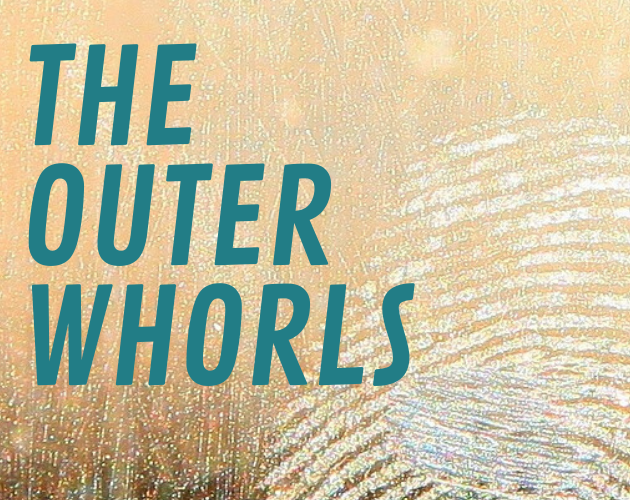 I started with the most obvious implementation: make prints on a piece of paper and use them as representations in a map-making game. I initially thought that each print would be a galaxy (spinning spiral galaxies, swirling fingerprint ridges) but focused down to a single planet.

I guess there's nothing really stopping you from interpreting "World" as a galaxy or cluster of planets, and "Galaxy" as a greater cluster of galaxies, so hey if you want to do that, go (outer) wild. 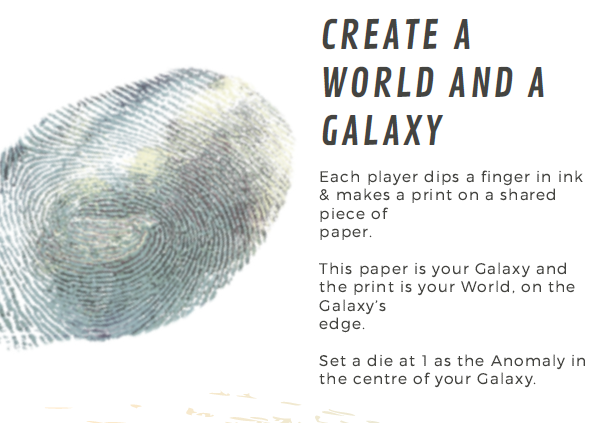 From there, it wasn't a big leap to make the main interaction being drawing lines between fingerprints, connecting the ridge lines from one to another. I used Microscope's Lens as a reference for how to set up topics for the connections. 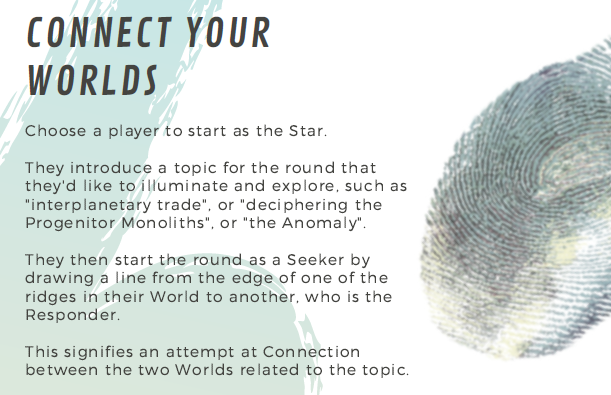 I initially thought of making this an adaptation of The Quiet Year, except with the connecting lines rather than card draws, so you'd have actions to build connections and then build up a galactic community.

This probably would also work fine as a game, but I looked back to Outer Wilds for inspiration. It's a game about looping 22 minutes before a sun goes supernova. That was a very compelling premise and also reminded me of one of my favourite short stories. I can't remember exactly what it was called or the specifics of it, but it was in the Songs of the Dying Earth anthology in honor of Jack Vance's Dying Earth series. It was about a final tour of the world before it ended. I wanted something with that melancholy air.

Instead of building up a galactic community, I made the game be about worlds connecting to each other as an anomaly grows and consumes the inner worlds in a galaxy. I added a die to track the state of the anomaly and act as a timer for the game. 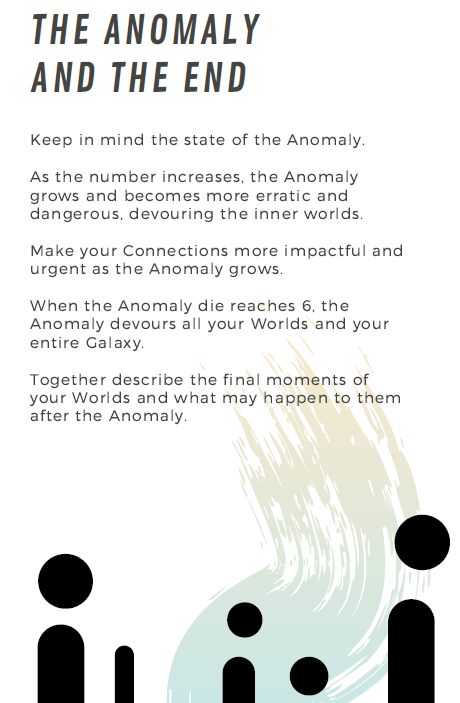 This actually ties straight back to The Quiet Year and the coming of the Frost Shepherds in winter, so it wasn't actually a big change from what I was already thinking. So why then didn't I stick to adapting a tried and true framework for this game? Well the answer is I am a stubborn and self-indulgent wanker. Using fingers for fingerprints just at the start of the game wasn't enough for me. Fingers needed to be way more integrated!

I came up with the finger pointing mechanism by way of the finger counting drinking game where you have to guess how many fingers you and your partner would put up (Found an article that refers to two variations of it, "Finger Guessing" and "Shi Wu", literally "Fifteen" since you're guessing in multiples of fives). Rather than guessing fingers, I narrowed it down to just whether the fingers matched. 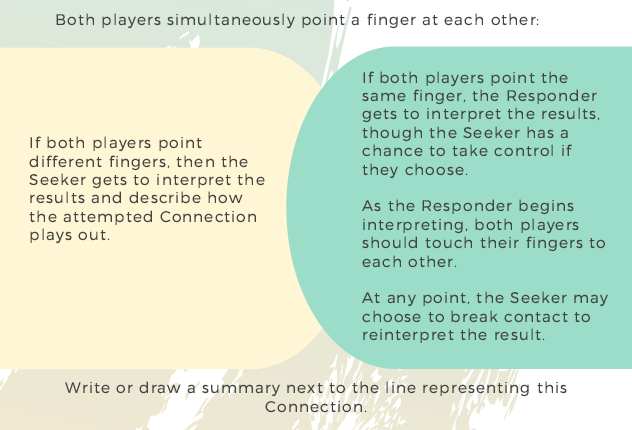 Initially I had the Responder just fully describe the result of the connection on a match, but I felt that wouldn't feel good for the Seeker as it's "their turn", so I added the finger contact as a sort of veto mechanism so the Seeker could take back control if they chose.

Funnily enough, this isn't the first time I've used fingers as a game mechanic. Baby's First RPG was a small game I put up on Twitter earlier that year that gained some mild traction and also featured fingers in a much less hygienic way.

Honestly half the time designing the game was figuring out what interpretations to assign to each finger. There are different cultural connotations with different fingers, but I ended up with: 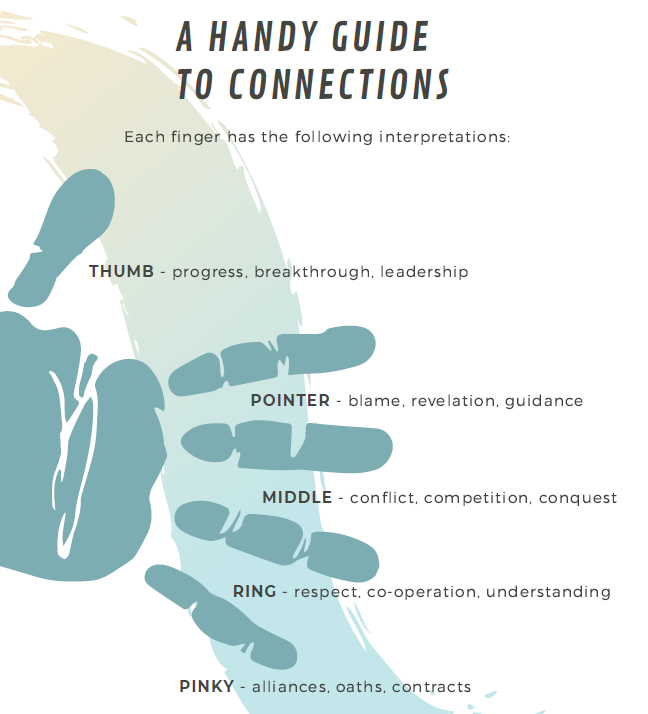 Calling it a "handy guide" ooooooh hahaha I'm so funny. This is what it's like to be me.

It's a short game (6-pages), so there isn't much left to say. I kept the game as short as possible, as the finger gimmick would probably outstay its welcome otherwise. I made sure that the way you advanced the anomaly also used fingers, to keep the motif going. 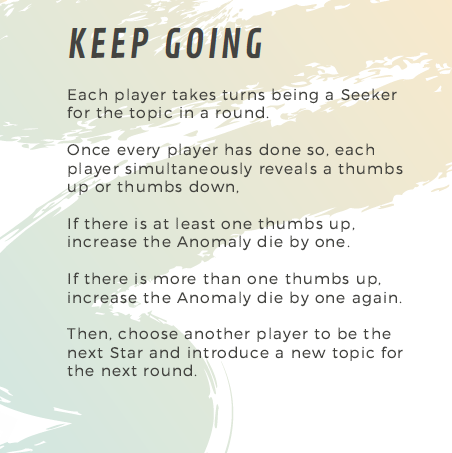 And that's it for The Outer Whorls. I hope you found it interesting, and I hope you'll check it out (through maybe avoid touching fingers with a bunch of people while we're in a pandemic) and let me know what you think!

Get The Outer Whorls

A story game of making connections between doomed worlds