This is a story game about doomed Worlds connecting through your fingers for 2 to 4 players.

You will need a large-ish piece of paper, an inkpad or wet markers or just ink, a die, writing tools and at least one hand each that has five fingers.

Use your fingerprints to represent your Worlds.

Make connections between those Worlds using a point based resolution mechanic aka pointing fingers at each other and interpreting the results.

Vote with your thumbs whether you want the Anomaly at the centre of the galaxy to grow and devour your Worlds.

In order to download this game you must purchase it at or above the minimum price of $3 USD. You will get access to the following files:

The Outer Whorls is a short storytelling rpg about a galaxy falling apart, played through fingerprints and dice.

The PDF is 9 pages, with an expressive, easy to read layout.

Gameplay is very simple and straightforward. Every player controls a world (a thumbprint.) Players may point at each other to interact with other worlds. These interactions aren't necessarily simple or peaceful, and the results depend on who points which fingers, and from which hands. At the end of every round of interaction, the group can vote to increase a death clock. When it passes a final threshold, the galaxy is devoured.

Overall, Outer Whorls tells tragic stories about communication and death, and it tells them slowly, allowing everyone to give them weight and meaning as the players ultimately scramble for connection in the face of the increasing Anomaly Die. If you like story-focused games, and you don't mind if they hurt, this is a potent one-shot. 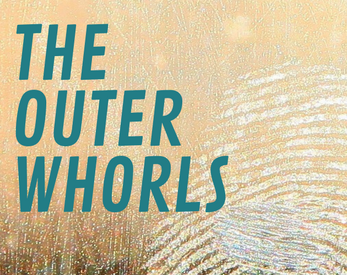 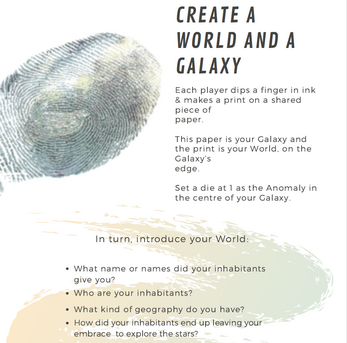 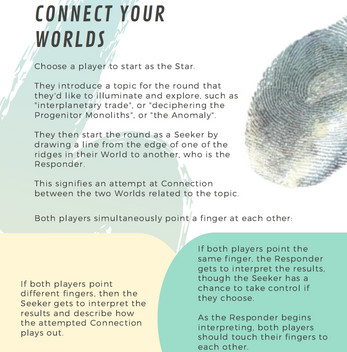 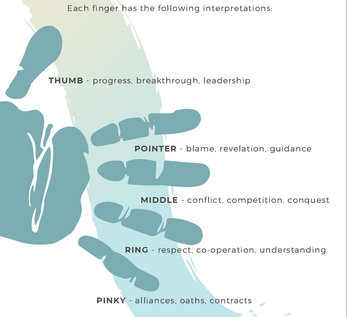