I made a Twitter thread recently explaining how to play An Altogether Different River, and also ended up including some notes of the design of the actions. I thought I'd document those notes here as well, with some expansion since I don't have to conform to Twitter's limitations.

An Altogether Different River is a GMless game for 2-4 players about creating a town together, and seeing how it changes through the lens of those who left and return and those who stay behind. It focuses a lot on relationships with home and each other. 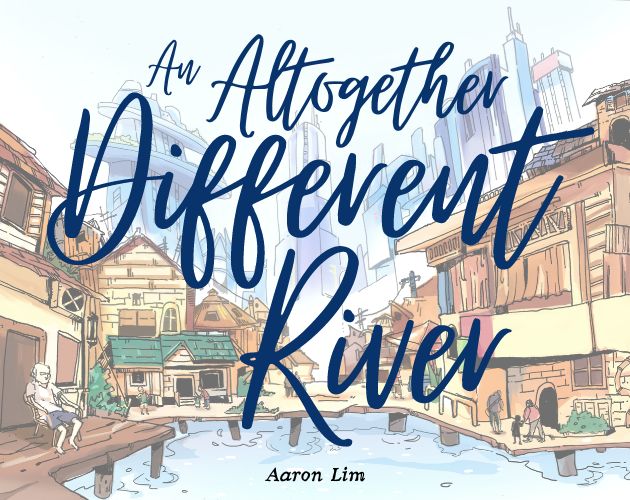 The game structure is pretty simple. You start by creating a Town together by combining several elements that you've chosen. This mechanic was borrowed from Downfall, an amazing game by Caroline Hobbs. Each player provides an element that they're interested in, and the Tow is created from the synthesis of all the chosen elements, which I always find really cool and want that in this game because it echoes the later synthesis of player inputs as you build of each other's contributions. 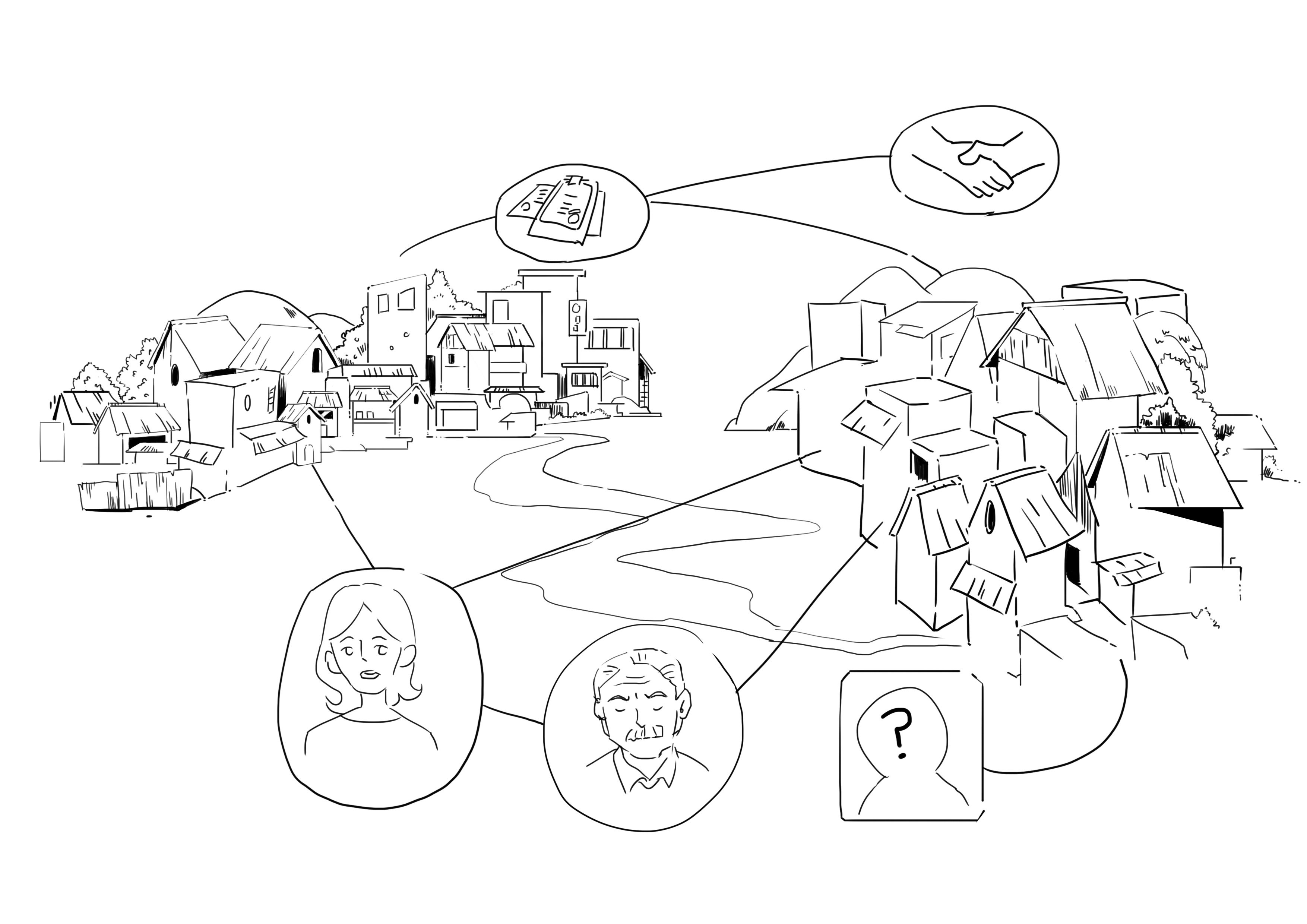 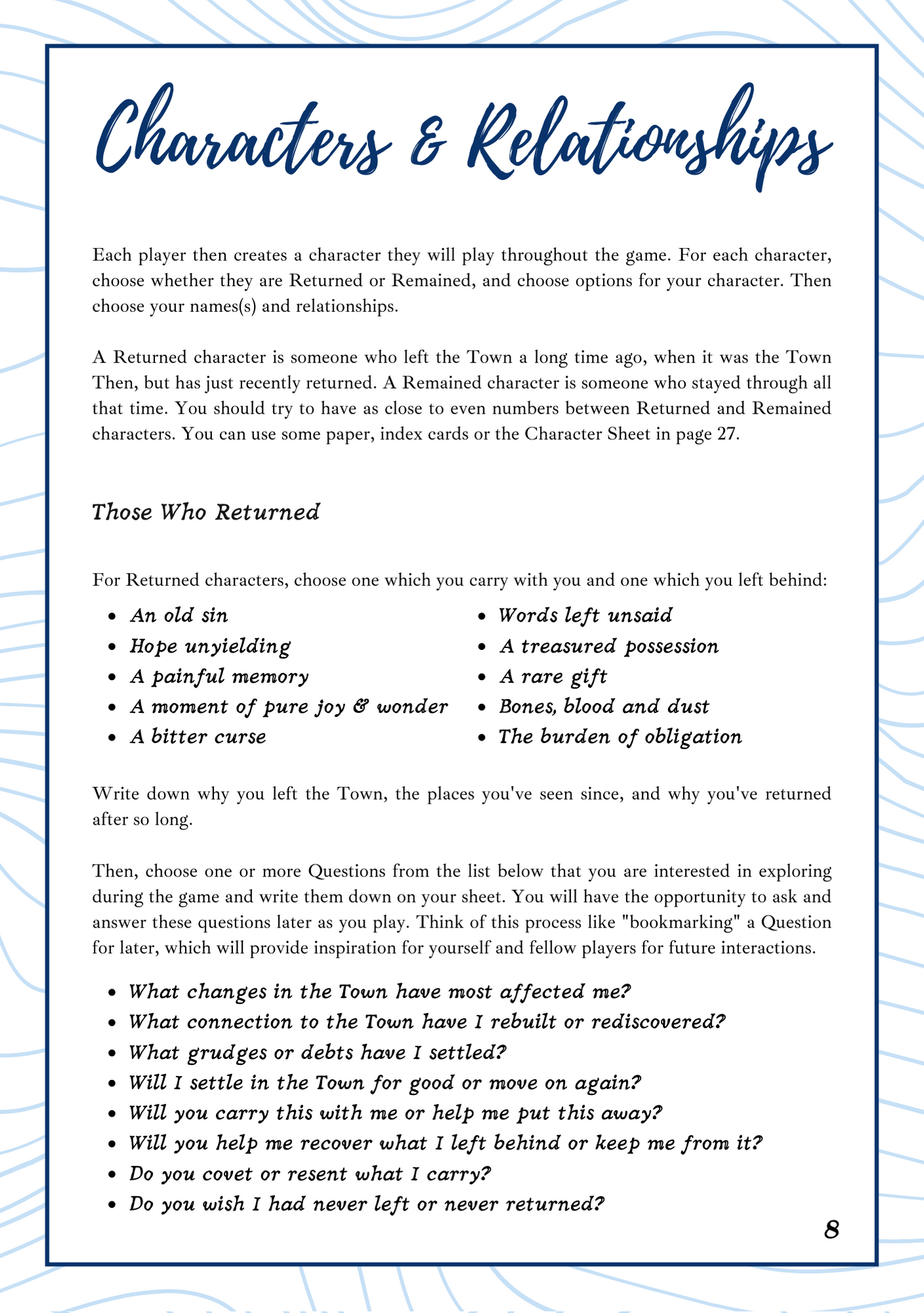 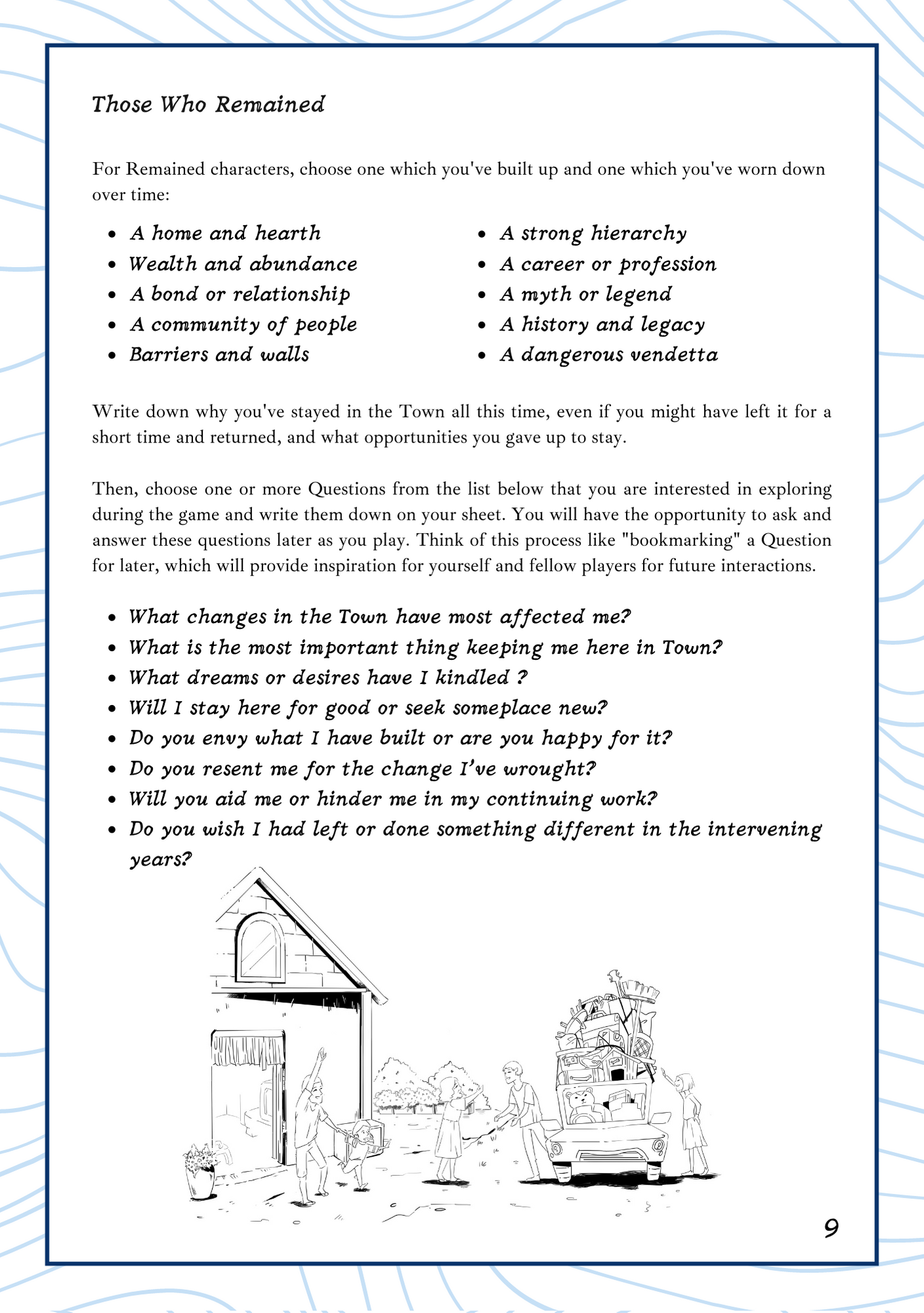 After setting up the Town and the characters, you move into taking actions. For the first couple of rounds, you are in Establishment Rounds where your actions add more details to the Town using prompts from a deck of Town cards. Each character type introduces aspects at different times of the Town's existence. Returned characters introduce aspects of the Town as they were in the past, before they left. Remained characters introduce aspects of the Town as they are now. Similar to the differences in prompts, I wanted each type of character to relate to the aspects differently. The Returned look to the past and nostalgia while the Remained look to the present and to their relevance to their situation now. Aspects don't just cover physical locations and residents, but also traditions and events that happen in the Town to explore the character of the Town and the people there. 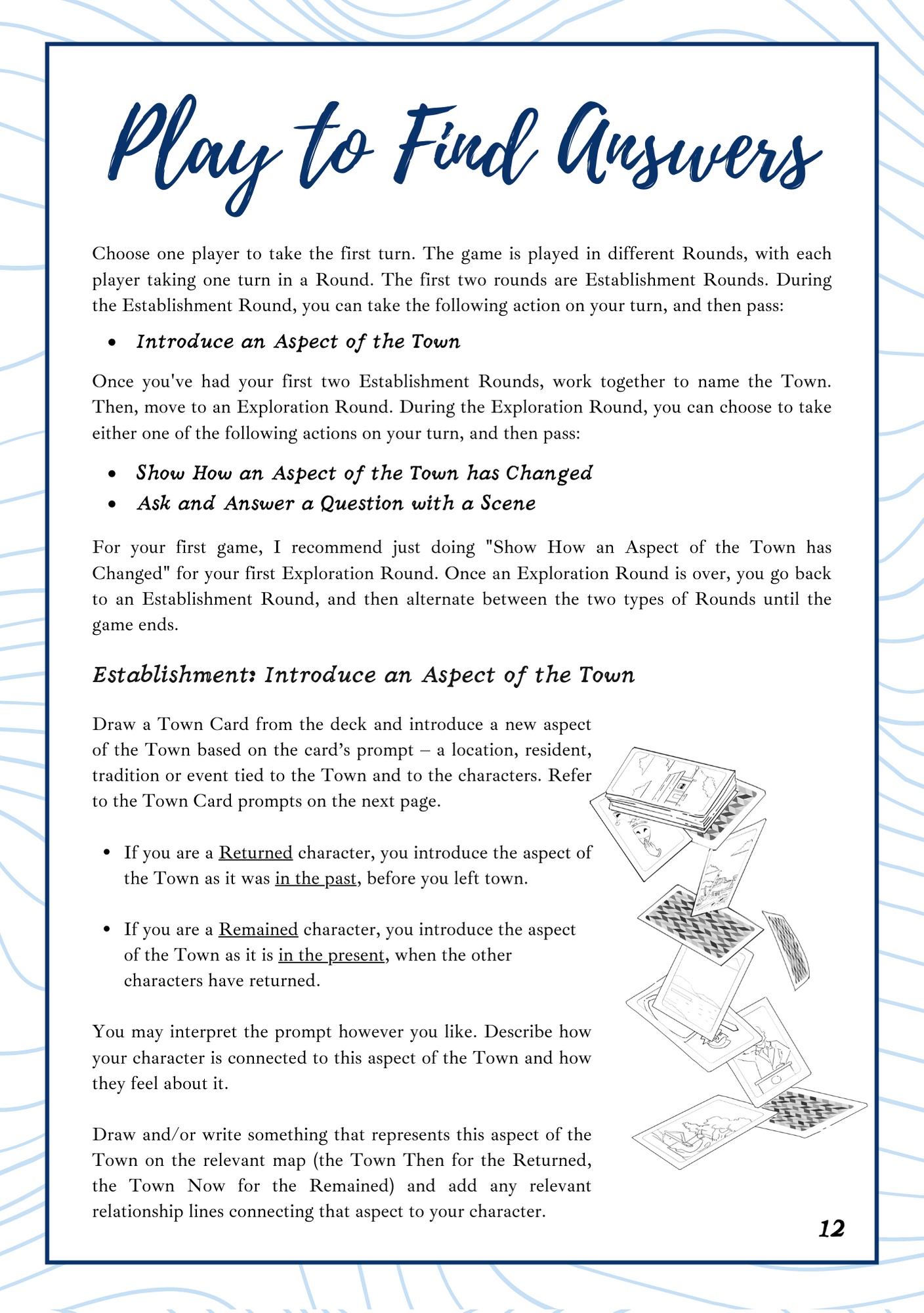 After the Establishment Rounds of adding details, you go into Exploration Rounds that let you delve deeper into the changes in the Town and how the characters relate to different aspects of the Town and each other.

The structure of the actions is heavily influenced by the way Ben Robbins' Microscope structures actions. In Microscope, you explore Periods which contain Events which contain Scenes, drilling down into more detail each time. Each action is layered in terms of the amount of detail that gets added to the game, but they also build on and expand on each other.

I settled on 3 layers of actions in a similar way, with each one adding more granular detail while also still relating to each other.

Introducing aspects serves as a simple way to expand detail on what's in the Town, which provide hooks for the characters to latch onto to explore further. It also is the "lowest effort" action since you can always look to a set of prompts for guidance. This is the foundational layer upon which you build the other actions.

The next layer is then complicating the details you've added by showing how the aspects change between the two time periods of the Town. Showing the change is done by picking an existing aspect and then introducing how it's like in the other time or map of the Town. This action builds on top of the "introduce an aspect" action, so again provides some prompting to the player based on existing contributions. There are no restrictions to who can pick what aspect, so you're free to expand on the past or the present of the Town as you like. This action also starts to build up connections between characters, as you also get to ask another character how they feel about the change that you've just introduced, which can happen in-character. This serves as a half-step towards a full scene, by just focusing on one thing. To my mind, it's also the most crucial action in the game, as it is a game about change and how we relate to it and this action basically encompasses that thematic thrust by introducing the change and also interrogating how the characters feel about it.

The final action type is to get into a full scene. This lets you really get into details of how characters inhabit this place and showcase more of the little things that add up to the feeling of the town. Scenes also focus on Questions, similar to Microscope. You get a list of Questions during character creation that you can use as guidance on what kinds of scenes you'd like to explore. The Question prompts also include ones phrased as Questions to ask other characters, drawing from the question format in Avery Alder's belonging outside belonging games like Dream Askew. 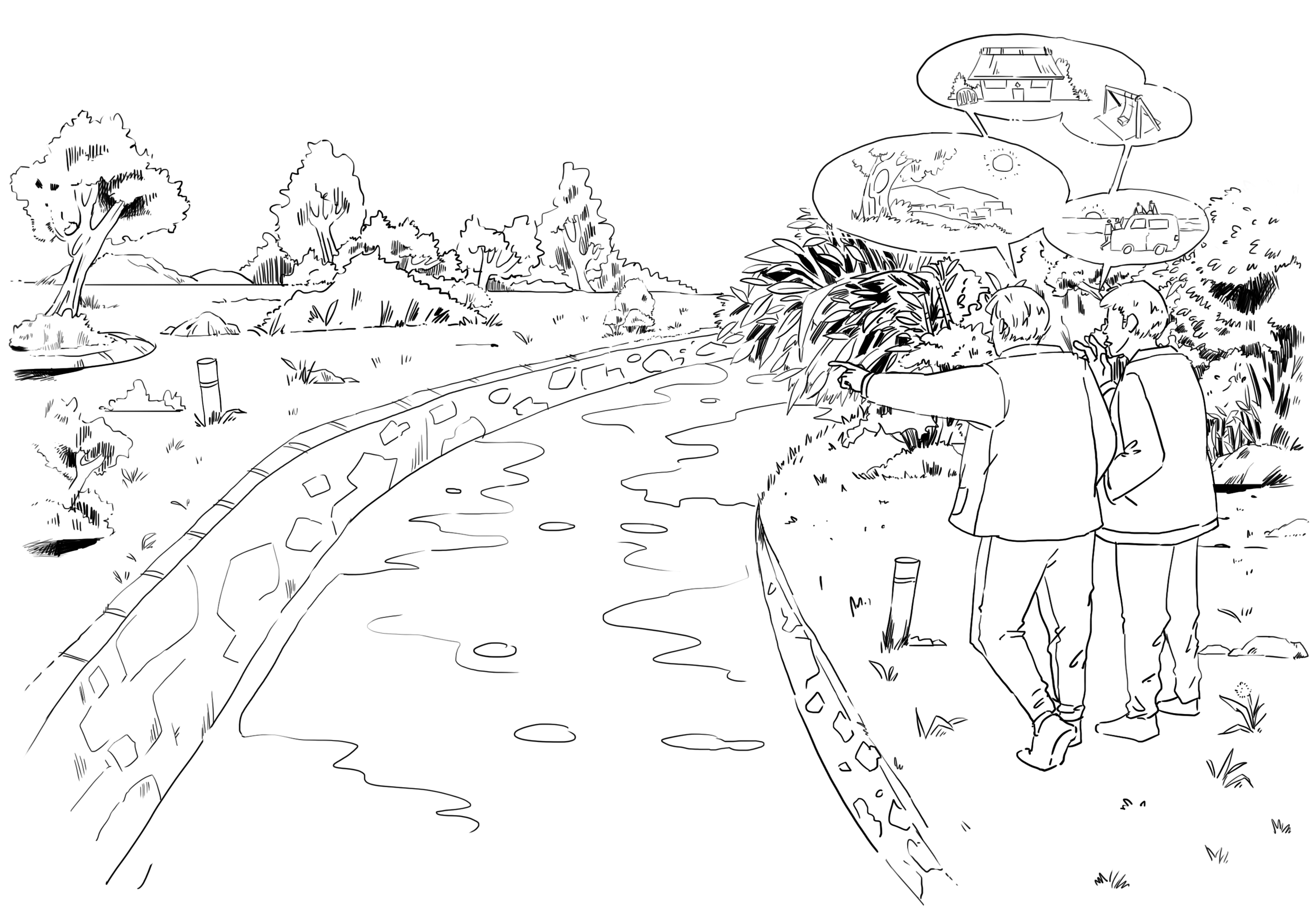 You can also just come up with your own Questions to drive scenes. I wanted to provide a balance between being able to get into specific themes brought up in your game, and providing some guidance to spur the process on. I previously had each character pick 2 Questions. One was about their personal relationship to the Town, and the other was about how they interacted with another character. I figured you really only need one to start of, as you would probably change your mind on what you'd like to focus on when you actually play.

I also wanted a way to remind players about the Questions driving the scenes as they play, so I came up with writing the Question down in "the River" between the two maps and then writing the answer there as well later. I'm hoping this will serve as a physical reminder, and makes it such that you could have a single sheet containing the Town maps, Relationship map and the answered Questions as an artifact of play.

One thing I wanted to really make clear about the end of the game is that players should leave some Questions unanswered. I frame it as closing a chapter on the Town, rather than playing to a definite end. Because Towns aren't just about One Story or just a few important people. Time keeps moving and the Town and its people are going to keep changing. I did suggest a variant of the game where you could string together multiple games using the same Town, and just keep moving forward in time, but I've not actually tried that hah. 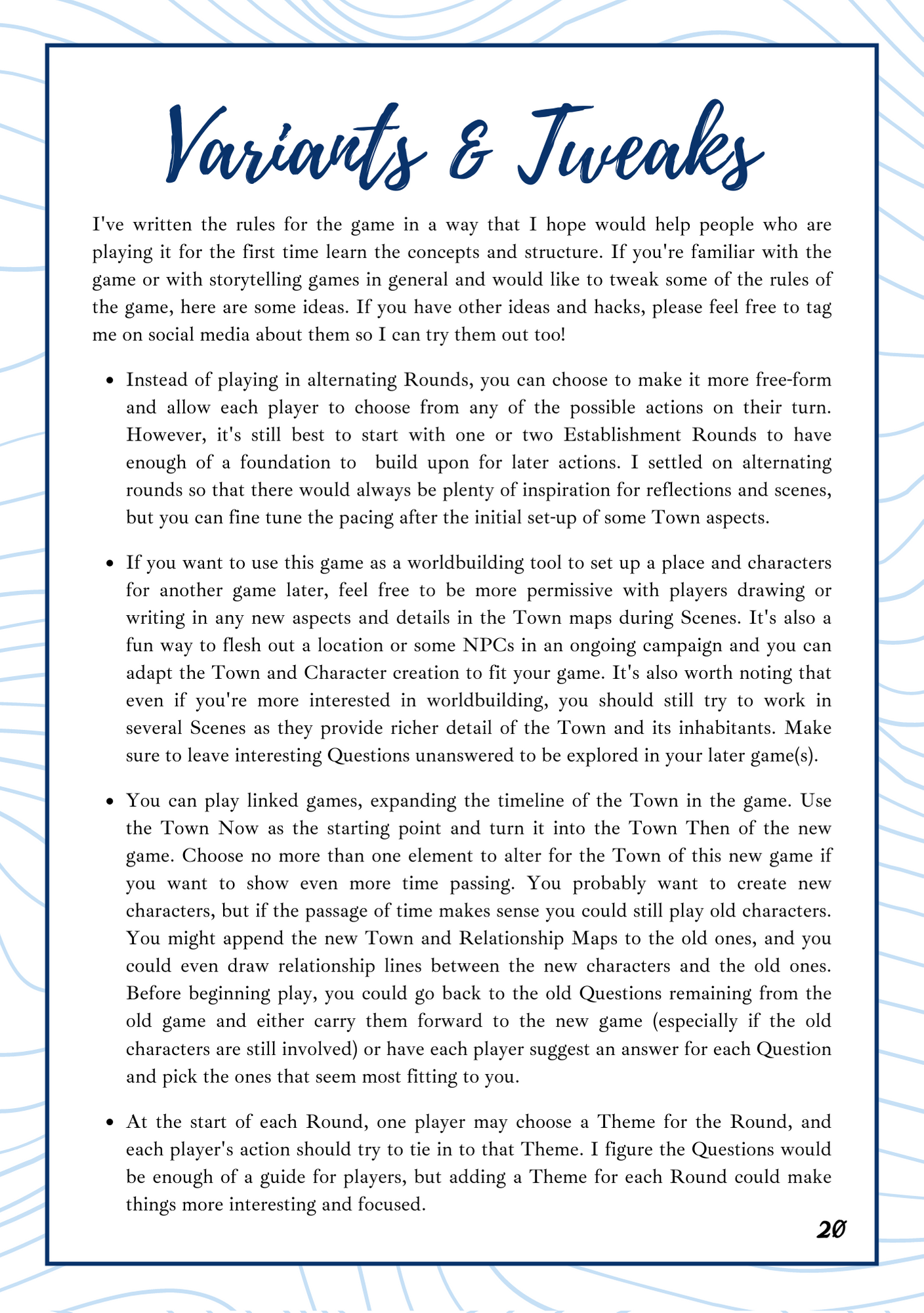 Actually, besides the straight up "rules of the game", I'm quite happy with how I explained setting up boundaries and expectations, and providing some play advice and also some variants and tweaks to the gameplay. I haven't actually playtested the tweaks and variants though some parts of them have been used in previous versions of the game. 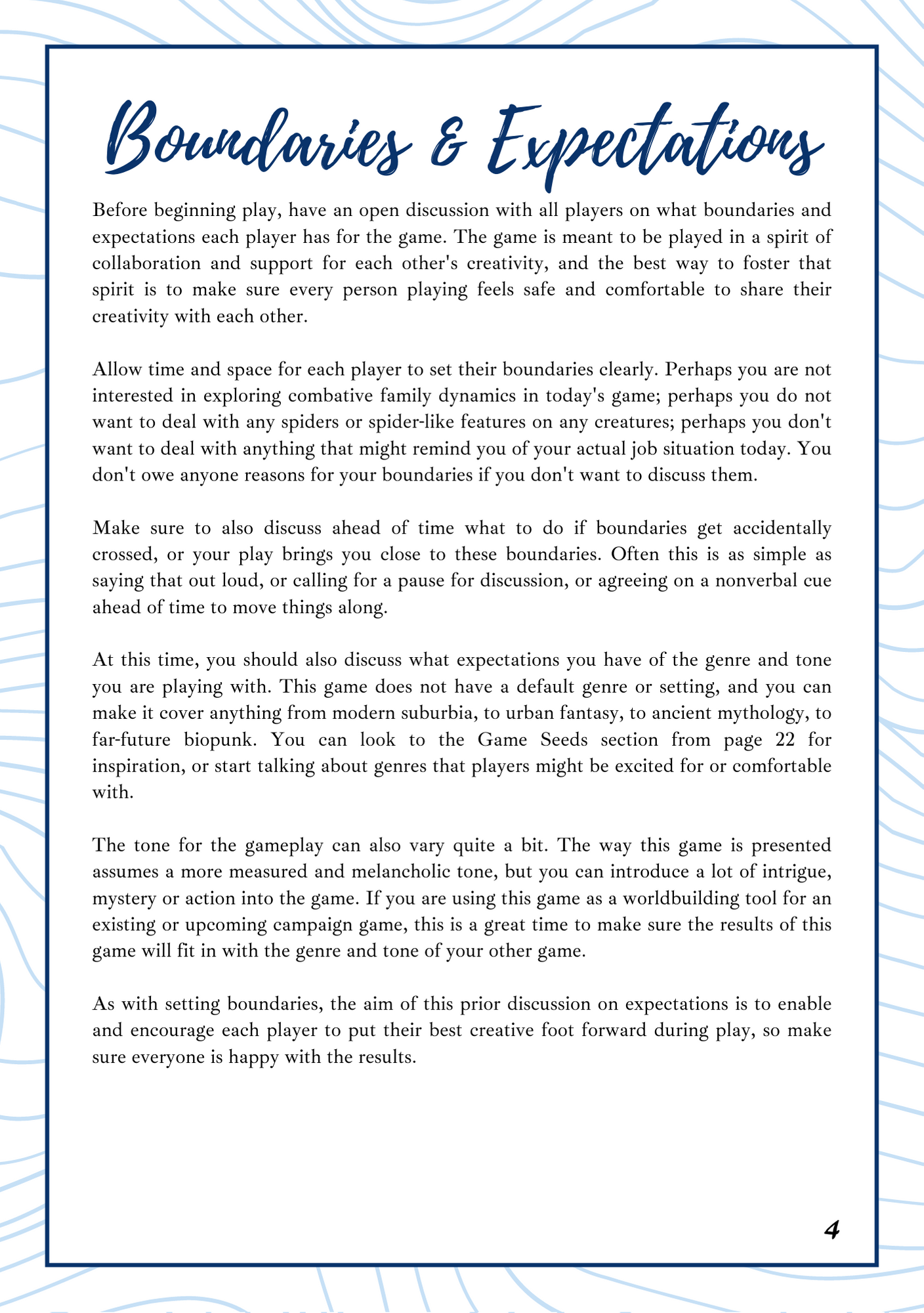 In these sections I try to be candid about where I'm coming from, not from some authoritative point of view as the unimpeachable creator of the game, but from a place of me as a player and facilitator trying to run this game I made as best I can. I hope that comes through.

I want the structure and text of the game to provide the best tools that I can to people reading it that they can run it and play it with confidence. I try to be mindful of how much assumed knowledge I have as a designer and someone who's played the game multiple times. A lot of it was providing scaffolding or footholds through prompts and drawing lines between the actions of the game. I ended up cutting down some of the examples of play due to space and pagecount concerns, so if I ever re-do the game, it'll be to expand those. 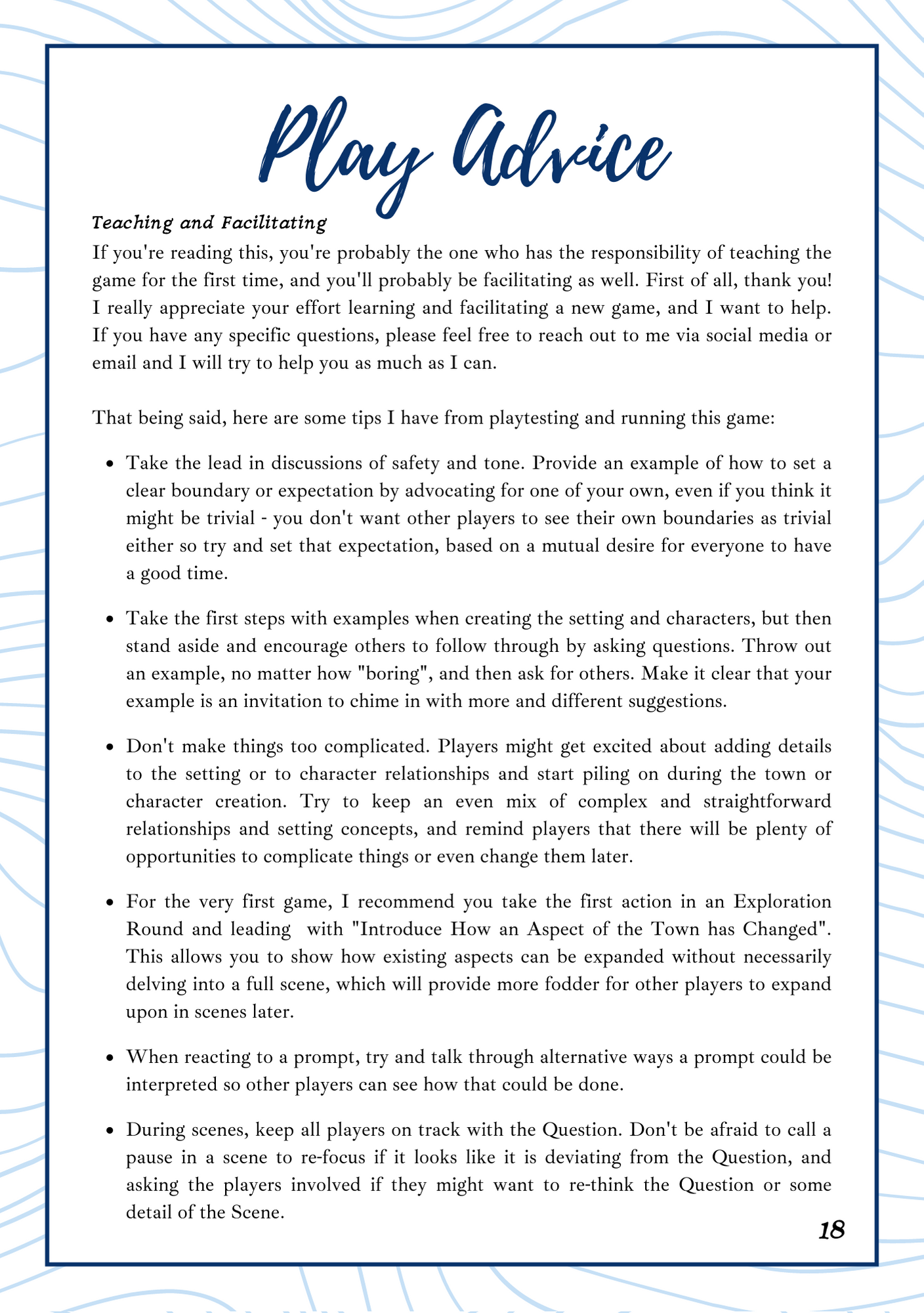 Also one of the things I loved about how Downfall and Follow help prompt play is the Game Seeds sections, so I made sure to include a few of those as well. The Game Seeds section was also very fun for me to write because I could include some references to other things I've made or to friends and playtesters that are just little nods for me. 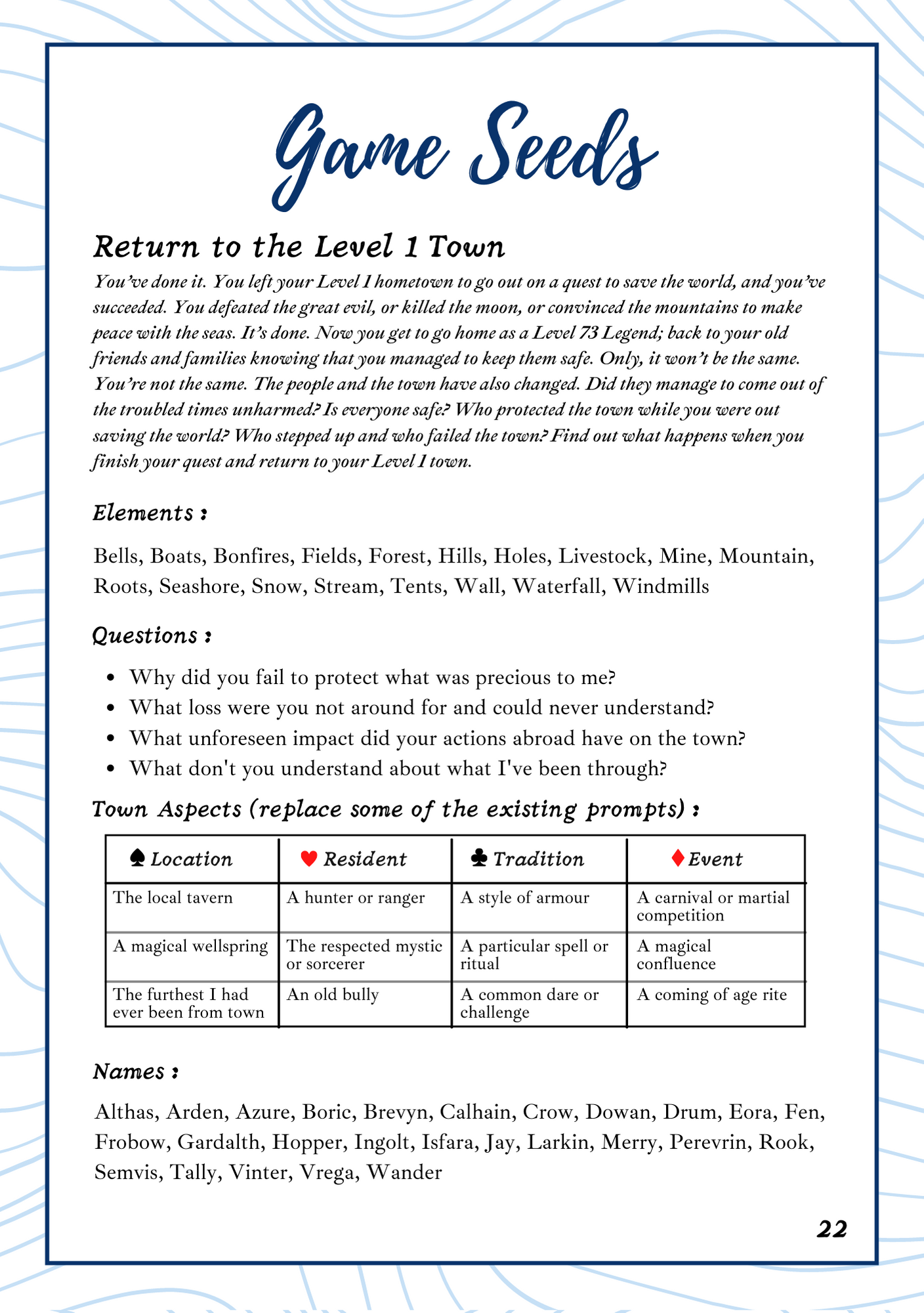 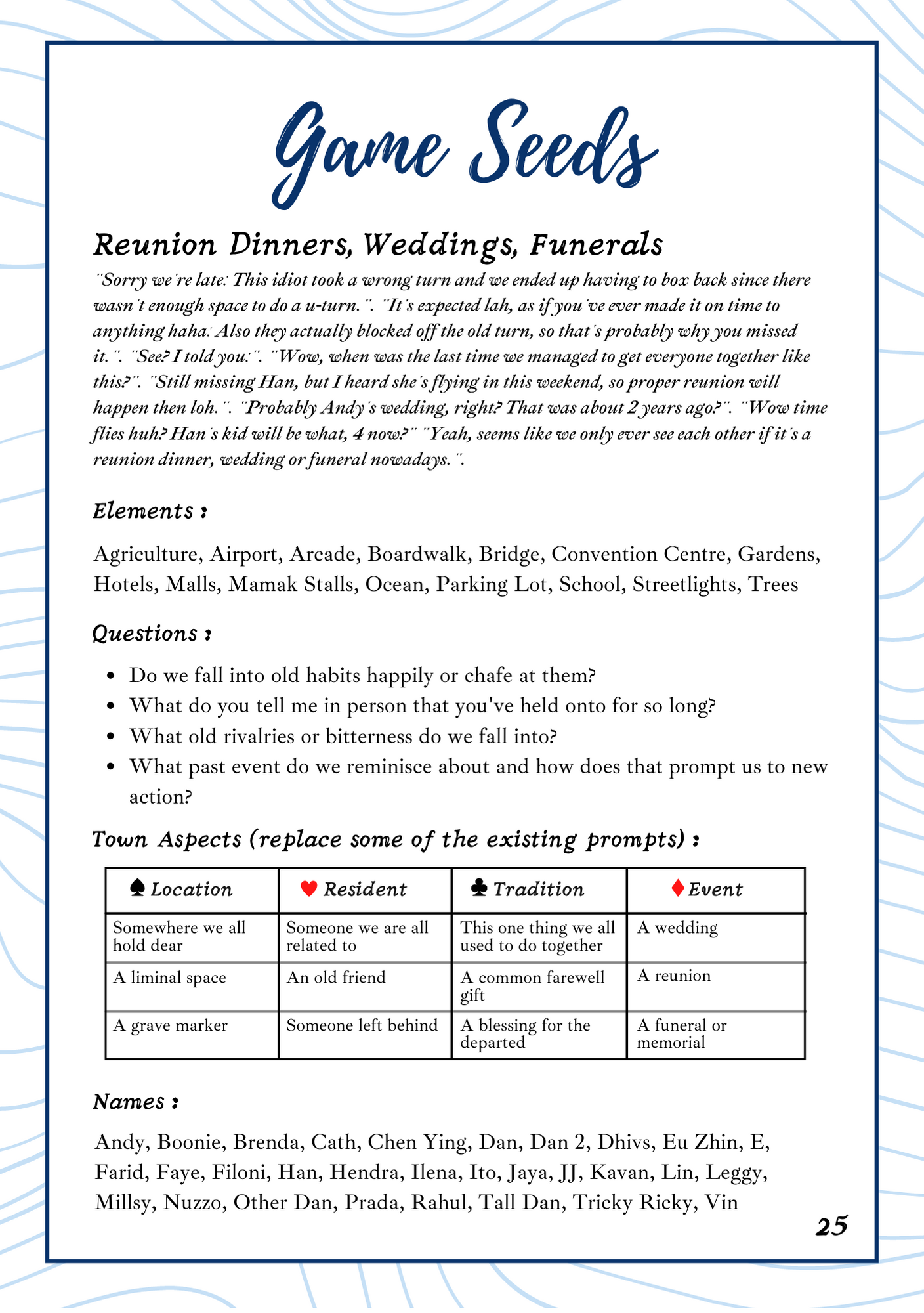 One of my favourite bits of the Game Seeds section is getting to put in Dan, Dan 2, Tall Dan and Other Dan as suggested names because people with the same names in friend groups aren't represented enough, including in RPGs. Back in uni I participated in the "Aaron-Offs", since there were 5 Aarons in our residential college, so we had a series of challenges to decide who got to be called "Aaron". The losers had to go by nicknames (it didn't stick, but it was a fun evening). Have two D'rak'shoth's in your party, cowards!

Get An Altogether Different River